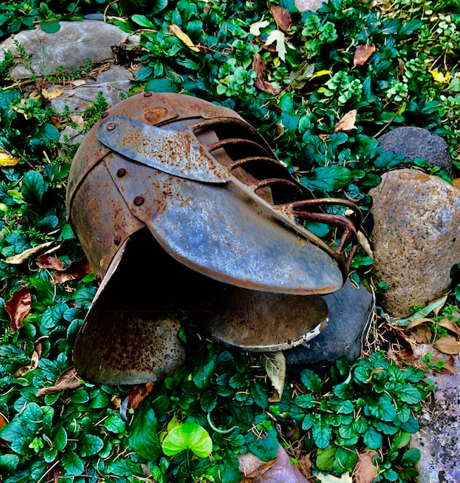 I accidentally discovered armor when my Father died. I’d been unaware, until a confrontation with a neighbor revealed how guarded I’d become.

She’d learned of my Father’s death and asked, “How are you?”

“Fine?” She asked, “How can you be fine? Your Father just died.”

The skepticism reflected in her eyes caused me to doubt myself and wonder if I was missing something. Her question lingered as I attended to the funeral. Annoyed, I asked myself – “What should I be feeling?”

I felt relief. My Father had been ill for years and his torment was finally over.

Relief!….Fine!…. not even genuine emotions, but all I could summon up in the moment. Emotion appropriate to the death of my Father such as regret, sadness or grief failed to penetrate the thick shell that had mysteriously formed around my heart. I imagined feeling sad as I stood at his grave, but it felt like just a head-game.

Emotions requiring control, resolve or spine stiffening came easy, but I avoided the more “tender” feelings, denying emotion that threatened to bring tears to my eyes or choke me up. I didn’t want to appear out of control. As a child tears came easily and freely at – inconvenient moments. I experienced crying as a source of embarrassment and as young as 7 years old pushed emotion down to stop the flow of tears. Suppression became the first piece of armor I strapped on.

I needn’t go into the multitude of reasons I built armor over years. I’d armored up slowly, constructing clever curves and ridges in an earnest effort to deflect disappointment, loss or heartbreak. I constructed plausible stories making others responsible for my disappointment and heartbreak. I was delighted to discover denial and projection snapped together nicely with suppression.

My skeptical neighbor prompted me to consider whether my emotional range had indeed atrophied. Curious what I might be missing, I decided to take a risk and explore feeling emotion without the questionable benefit of armor.

I’d be lying if I claimed removing my armor was easy. Wearing it had become second nature and many bits and pieces defined who I’d become as a Father-Husband-Man. Discarding my armor felt reckless and continuing to rely on it as a first line of defense against inconvenient emotion cost more than I imagined. I grew increasingly confused as to what I felt. I could count on anger and fear, but all the rest felt ambiguous.  My deepest fear was if I dropped into the abyss of emotion without armor, I’d lose all control and never find my way back.

Over beers with a trusted friend, I detailed my plan to re-wire the way I’d dealt with emotion and why. He thoughtfully encouraged me –

“You have emotion for a reason, God doesn’t make junk!”

It was just what I needed to hear.

Three decades have past since my Father’s death forced me to see how out of touch I’d become. Exploring my inner emotional terrain has paid dividends. I’m now better able to discern between anger and hurt, shame and pride, love and lust. The ability to make fine distinctions comes from practice, familiarity and using emotion for its intended purpose – To inform action with accuracy.

Emotions rarely demand action beyond serious consideration and interpretation. Ignoring emotion tends to just kick the can down the road resulting in emotional compression. The body stores emotion until we determine what the feeling is trying to tell us. I’ve found the most reliable approach is to release the pressure through expression. Expression (speaking) relieves pressure and in the company of trusted council can greatly increase accurate interpretation. Words-tears-physical action expressed with little inhibition and examined with ruthless honesty steadily increase emotional range and agility.

My head often stumbles across an incomplete emotion or story and is always more than eager to make up an ending and argue persuasively for the result. If I remain un-armored and open, emotion spots the bullshit in my story every time. Head and heart are meant to work together like a matched set of workhorses. If you refuse to harness one or leave it in the barn the best you can expect is to endlessly plow circles in the field.

There have been times I curse the role emotion has come to play in my life. I get stuck occasionally in unpleasant emotion, anxiety, fear or anger can grip me for longer that I’d like but I’ve learned suppressing emotion is a temporary solution better to stick with it and feel deeply into the discomfort and emotion relaxes its grip.

The fear I experienced prior to removing my armor turned out to be one of those dramatic stories my head is fond of constructing. Fearing terminal vulnerability or the inability to defend my boundaries proved faulty. The armor I’d constructed over years remained available at a moments notice. I learned to snap in on and off with ease. Intellect, emotion and armor became collaborators instead of adversaries competing for dominance.

I expect “thinning” my armor will most likely occupy me for the rest of my life and slipping it on and off appropriate to any situation requires a certain mastery that only years of practice and discipline provide.  – Snake